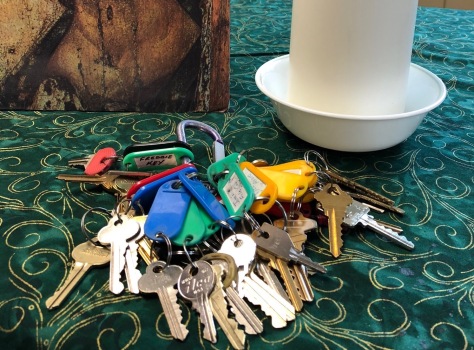 Given by Rob to Linda and now help open all doors for Martha at St. Georges

They came to Jericho. As Jesus and his disciples and a large crowd were leaving Jericho, Bartimaeus son of Timaeus, a blind beggar, was sitting by the roadside. When he heard that it was Jesus of Nazareth, he began to shout out and say, “Jesus, Son of David, have mercy on me!” Many sternly ordered him to be quiet, but he cried out even more loudly, “Son of David, have mercy on me!” Jesus stood still and said, “Call him here.” And they called the blind man, saying to him, “Take heart; get up, he is calling you.” So throwing off his cloak, he sprang up and came to Jesus. Then Jesus said to him, “What do you want me to do for you?” The blind man said to him, “My teacher, let me see again.” Jesus said to him, “Go; your faith has made you well.” Immediately he regained his sight and followed him on the way.

O  Observe: Jesus and the disciples have started out on a new stage of the journey. They are leaving Jericho and heading toward Jerusalem. Ominous. Who knows what can happen in Jerusalem? From a determined fix on their destination they are suddenly jarred to a halt by this annoying bleating. Will someone please put a stop to this noise! But Jesus’ soft response soothes the frustration and the off-road delay becomes The Way.

A  Apply: If I were on the side of the road as Jesus walked by, would I know enough about what gives me pain to cry out? Would I have the courage to ask for help? Who would I annoy and slow down? What would I want from Jesus to help me get moving?

P  Prayer: My prayer to God: Help me feel my own pain and know what I need to grow. God’s prayer in me: Do not hear the noise of others but listen for their deeper pain and then move toward them.

Then Job answered the Lord: “I know that you can do all things, and that no purpose of yours can be thwarted. ‘Who is this that hides counsel without knowledge?’ Therefore I have uttered what I did not understand, things too wonderful for me, which I did not know. ‘Hear, and I will speak; I will question you, and you declare to me.’ I had heard of you by the hearing of the ear, but now my eye sees you; therefore I despise myself, and repent in dust and ashes.” And the Lord restored the fortunes of Job when he had prayed for his friends; and the Lord gave Job twice as much as he had before. Then there came to him all his brothers and sisters and all who had known him before, and they ate bread with him in his house; they showed him sympathy and comforted him for all the evil that the Lord had brought upon him; and each of them gave him a piece of money and a gold ring. The Lord blessed the latter days of Job more than his beginning; and he had fourteen thousand sheep, six thousand camels, a thousand yoke of oxen, and a thousand donkeys. He also had seven sons and three daughters. He named the first Jemimah, the second Keziah, and the third Keren happuch. In all the land there were no women so beautiful as Job’s daughters; and their father gave them an inheritance along with their brothers. After this Job lived one hundred and forty years, and saw his children, and his children’s children, four generations. And Job died, old and full of days.

What! The whole non-retributory God theme of Job is undone in just a few verses. From the dung heap of suffering, Job’s wealth, health and family are restored and his life is “full of days.” I sometimes wonder if this last bit was tacked on later by some well-meaning scribe who just couldn’t resist a Hollywood ending.

Whether it’s original or an addition, the spiritual formation truth this happy ending affirms for me is my awareness that when I finally stop thrashing about and surrender to the mystery of God my life seems to rebuild. In fact, I have made it a spiritual commitment to stop swimming against the stream. Flowing with the current—that is, trusting and resting in God’s grace rather than over-controlling—results in an easier, happier and much more playful existence.

Setting aside the happy ending for a moment, the huge spiritual formation message from Job is that no matter what happens to you, stay in relationship with God. Through it all, dung heap to gold rings, Job does not abandon God. Even when Job was mightly annoyed and justifiably angry, he stayed engaged with God, ready to give God a piece of his mind.

The result is that Job gets to know God more deeply. “I had heard of you by the hearing of the ear, but now my eye sees you.” This is like saying, I knew about you but now I know you.

Jesus encouraged this kind of engagement with his followers saying, “I am with you always.” We spiritually grow when we experience God’s loving presence through it all, good and bad times.

Do you ever feel like screaming at God for the things that have happened to you or those you love or are concerned about? Job shows us that God is big enough to hear our cries of pain, and through it all, we might even grow to have eyes to see.

I will take a few moments today and be with the God of ferocious whirlwinds and quiet stillness.

I will bless the Lord at all times; his praise shall ever be in my mouth. I will glory in the Lord; let the humble hear and rejoice.  Proclaim with me the greatness of the Lord; let us exalt his name together. I sought the Lord, and he answered me and delivered me out of all my terror.Look upon him and be radiant, and let not your faces be ashamed. I called in my affliction and the Lord heard me and saved me from all my troubles.  The angel of the Lord encompasses those who fear him, and he will deliver them. Taste and see that the Lord is good; happy are they who trust in him!

“Taste and see that the Lord is good.” A metaphor I often use (for which I can not find an attribution) is that the difference between intellectually knowing about God and emotionally relating with God is like the difference between reading the menu and eating the meal. Like the reading of the menu, knowing about God might be intellectually stimulating; emotionally relating with God is like the meal that nourishes the body, fills the senses and deeply satisfies the craving. We are not meant to simply know “about” God. We are invited into a relationship and given a chance to “know” God.  What a privilege! What a feast!

What would it mean for you to taste and see…to experience the goodness of God?

Furthermore, the former priests were many in number, because they were prevented by death from continuing in office; but he holds his priesthood permanently, because he continues forever. Consequently he is able for all time to save those who approach God through him, since he always lives to make intercession for them. For it was fitting that we should have such a high priest, holy, blameless, undefiled, separated from sinners, and exalted above the heavens. Unlike the other high priests, he has no need to offer sacrifices day after day, first for his own sins, and then for those of the people; this he did once for all when he offered himself. For the law appoints as high priests those who are subject to weakness, but the word of the oath, which came later than the law, appoints a Son who has been made perfect forever.

Another week of Hebrews and the priestly metaphor. I am having difficulty getting into Hebrews. It is so transactional. The writer is using the metaphor of the high priest for the saving action of Jesus. The priests absolve other people’s sinfulness. The problem is that they are human and so are also sinful, so the transaction is not completely abiding. Jesus on the other hand, is without sin and so the absolution is, as the later passage in Hebrews 10:10 says “once and for all.”

I have always been struck by Cranmer’s line in the Book of Common Prayer communion service referring to Jesus who made himself “…a full, perfect, sufficient sacrifice, oblation, and satisfaction for the sins of the whole world…”.

When I am tempted to become the martyr and take on sacrifice as a badge of service, I am reminded that Jesus’ death and resurrection was not the way of guilt and shame but of freedom and redeeming love.

Do I allow others to grow beyond their failings? Do I allow myself the joy of forgiveness and Jesus’ loving freedom?

One thought on “Twenty–third Sunday after Pentecost (Proper 30), Oct. 28”

Love Letters has a new direction this year.

Each scripture meditation can be used to open committee meetings, church gatherings, governance sessions or simply as a personal devotion. Well meaning church folk sometimes ponder the utility of engaging in scripture at a meeting. “I am only here for the church business,” is what one often hears. It is important to remind ourselves that our “business” is in all things to be faithful to our calling and stay connected to God’s Spirit, energy and direction. Otherwise we labour in vain. (Phil. 2:16) My hope is that as clergy and lay leaders offer the Word of God in their ministry gatherings, these meditations will help enliven that process as a convenient and useful resource.